Learn from best practice from your peers across Asia Pacific, and globally by accessing shared materials, without duplication of effort

Review and localise these materials according to your needs 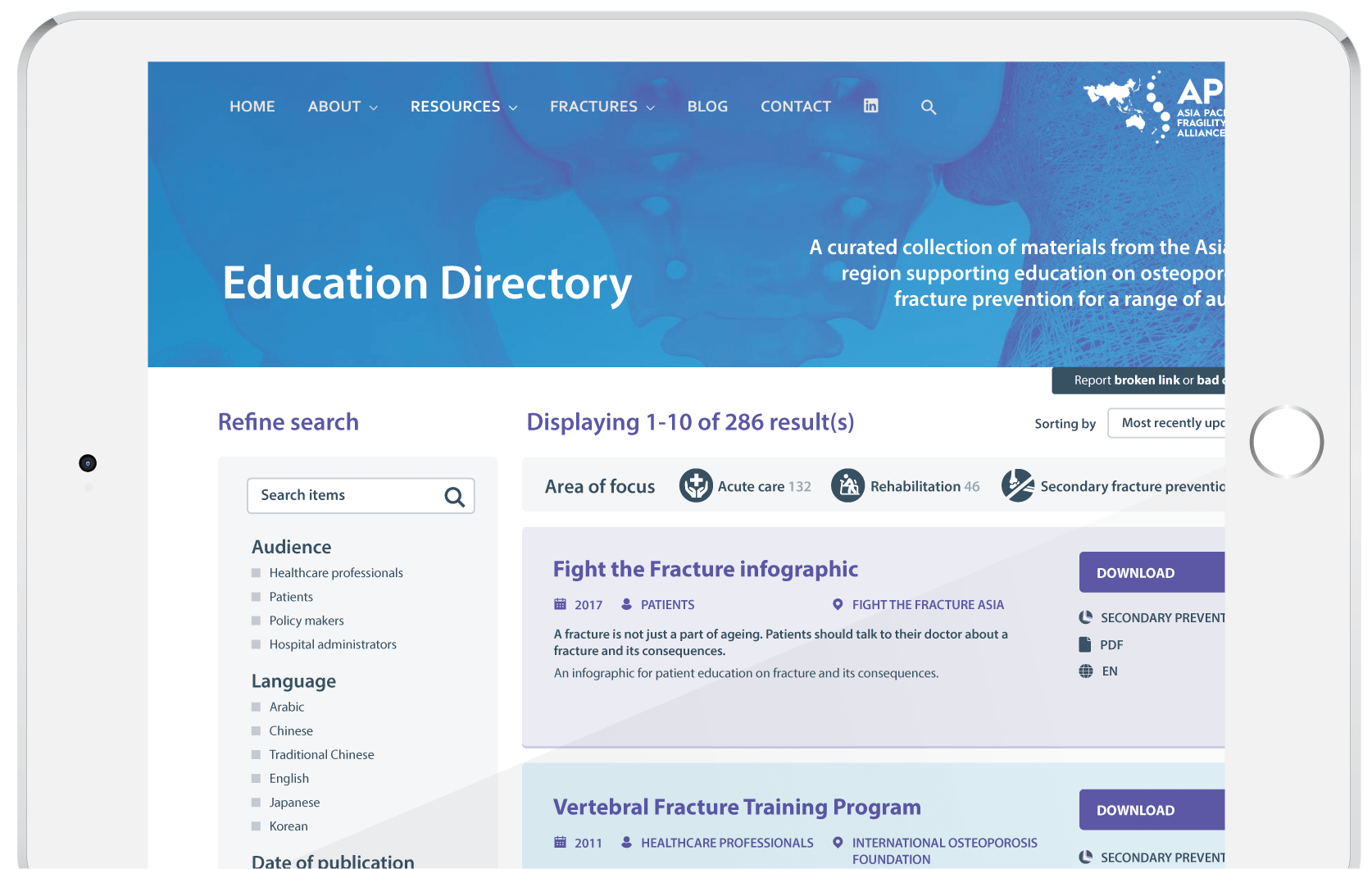 New Zealand raises the bar on growth & refinement of FLS

June 3, 2022
Osteoporotic fractures are a major and growing public health problem worldwide due to the ageing population and associated morbidities that increase fracture risk.1,2,3 In Australia,...

May 27, 2022
Helping to stem the tide of fractures in the Asia Pacific – the world’s most populated and fastest ageing region The Asia Pacific Consortium on...

May 17, 2022
Japan is a super-ageing society. While its population boasts the world’s second-longest life expectancy, it does however, have a growing number of older people living...

Snapshot of the global landscape of PFC programs

April 14, 2022
Fragility fractures are associated with high rates of disability, loss of independence, reduced quality of life for both patients and their carers, not to mention...

Looking down the 10-year pipeline for bone fractures

April 5, 2022
Patients living with osteoporosis are projected to increase in magnitude in the next decade. This means a crisis of bone fractures along with the forecasted...

February 23, 2022
Almost 40 per cent of individuals who experience a hip fracture are unable to walk, or will be institutionalised within a year post-fracture. Furthermore, 60...

Anti-osteoporotic treatments and mortality after hip fractures: A spotlight on Taiwan

January 21, 2022
Taiwan’s society is ageing rapidly. By 2026, it is projected that Taiwan will become a super aged society – when the proportion of a society’s...

Facilitating optimal fragility fracture management across the Asia Pacific throughout 2021

December 20, 2021
Despite continuing to navigate the highly complex COVID-19 pandemic landscape this year, we have nonetheless, made significant headway at APFFA, in fulfilling our mission –...

The number and proportion of the world’s population aged 60 years and above is growing at an unprecedented rate, and is set to accelerate especially in developing countries. An ageing population will continue to affect all aspects of society, with little evidence suggesting older people today are enjoying better health than previous generations.1

In a bid to address the situation, the World Health Organization (WHO) has announced the Decade of Healthy Ageing 2020 - 2030 – a 10-year-long concerted global action initiative designed to improve the lives of older people, their families, and their respective communities.1

Osteoporosis affects about half of all Australian women over the age of 50, and causes more hospitalisations than heart attacks, strokes and breast cancer combined.2

In Australia, four-times more women aged 50 and above have osteoporosis or osteopenia than men of the same age .3

In 2012, the total costs of osteoporosis and osteopenia among Australians aged over 50 was AUD$2.75 billion – a figure which is projected to increase to AUD3.84 billion by 2022.4

Forty-five per cent of the Japanese population was aged over 50 years in 2013, with a life expectancy of 84 years.

The proportion of the country’s population aged over 50 years is anticipated to increase to 51 per cent of the population in 2025, and 57 per cent by 2050.5

Studies have estimated that around 13 per cent of Mainland Chinese adults have osteoporosis.5

Projections suggest the total number of osteoporosis-related fractures in China will increase from 2.33 million in 2010, to 5.99 million in 2050.6

Costs of osteoporosis-related fracture cases in China are projected to increase from US9.5 billion in 2010 to US25.4 billion in 2050.6

Osteoporosis remains under-diagnosed and undertreated in Malaysia, although the prevalence is not well known, or documented.5

Malaysia is projected to have the highest (3.55-fold) increase in the total number of hip fractures by 2050.7

In 2010, the percentage of the Taiwanese population aged over 65 years was 11 percent of the total population.9 In 2025, the old-age population will account for one-fifth of the entire population.9

The cost per hip fracture in Taiwan was estimated to be at USD$3,242.10

Tragically, in 2009, 11 per cent of women and 18 per cent of men in Taiwan died within 12 months of a hip fracture due to infections related to being bedridden.12

The 2018 AFOS study further estimated the direct medical costs of hip fractures in Hong Kong to be US$85 million, with projected costs of such to increase to US$243 million by 2050.7

The highest rates of hip fractures in Asia have been reported in Singapore, with a four-to-five-fold increase in incidence over 30 years.5